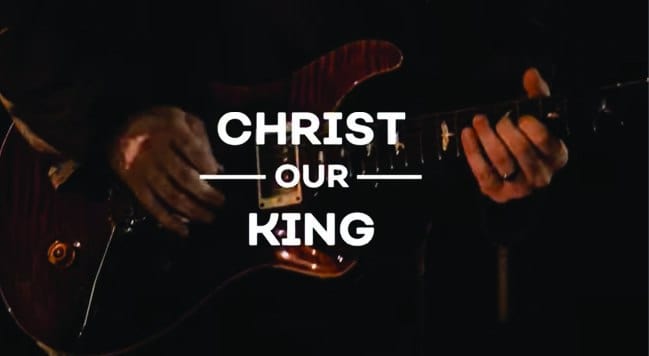 Christ our King
You will reign now and forever
Christ our Lord, our reward, nothing is better
Until the day we see our Savior face to face
Jesus will be praised

All Glory, All honor
To the King who reigns forever
Eternal, Unshakable
Is The Kingdom of our God

All Glory, All honor
To the King who reigns forever
Eternal, Unshakable
Is The Kingdom of our God

Some songs take years to write and Christ our King is one of those songs. I remember Daniel showing me the intro and turn we ended up using for this song back in 2019 and loving it.

We worked on a few verses and loads of chorus melodies, and I’ll never forget the day that the chorus for Christ our King came out. We were in our student center working through some ideas on the drums and an acoustic and built to the “Jesus will be praised” while we played the turn that we sat on for so long, and I remember us all loving it.

Fast forward to the end of 2019, when our country was gearing up for the presidential election. I’ve never seen such vitriol (from both sides) on what they thought of the other political candidate.

Our church happened to be in Romans 13 as we were heading down the home stretch of what would be a 3 ½ year stint in the book of Romans. The timing was definitely of the Lord. Our pastor walked our church through how we must submit to and respect governing authorities while only worshiping the Lord.

I tell you what…Some of what was being posted on social media and said in conversations by some in the “C” church in America edged toward worshiping the presidential candidate instead of just honoring them. It almost appeared as if the hope of our country was in the hands of two guys.

It’s almost as if we forgot that there is a King who reigns and whose Kingdom has no end.

So, we finished the song that is now “Christ our King.” We knew that, as a church, we needed to be reminded that there may be a donkey and there may be an elephant, but only the Lamb deserves our worship.

The Kingdom of God is way bigger than America, a political party, or anything. Our Savior speaks with a Galilean accent. He bows to no one, and He will reign forever.

Verse 1 of the song says,

When the earth begins to shake

We will look to our deliverer

When earthly thrones have passed away

Your kingdom has no end

Our hope is not found in the kingdoms of this world. Even the most powerful leaders eventually die, lose their reign, or their “throne” crumbles. Our hope is found in the King of Kings. We are not delivered by anything other than the sovereign rule and reign of King Jesus.

As the song says, His Kingdom is “eternal and unshakeable.” No other kingdom can stand against it. In His Kingdom is His loving rule and His careful leading.

One day all rulers will bend their knee to the true Lord of all. We’ll either do it joyfully as those who His blood has redeemed, or we will do it as objects of wrath.

Our prayer is that as we write these songs, more and more will see the beauty and glory of Christ and will surrender their lives to Him so that He will be their King. Our prayer is that we only give our full allegiance to Jesus. All else will fail us.

Christ, our King, will reign forever; that is our hope.

Hear about it first